“The real heroes are in the hospitals; we just did what we do best”

SEAT received a special recognition yesterday from the newspaper La Razón for the company’s ability to adapt and respond when manufacturing emergency ventilators at its facilities. Dr. Carmen Martínez, from SEAT’s Health, Safety and Emergency team, accepted the award at a ceremony held at the Real Casa de Correos in Madrid to pay tribute to all healthcare professionals. 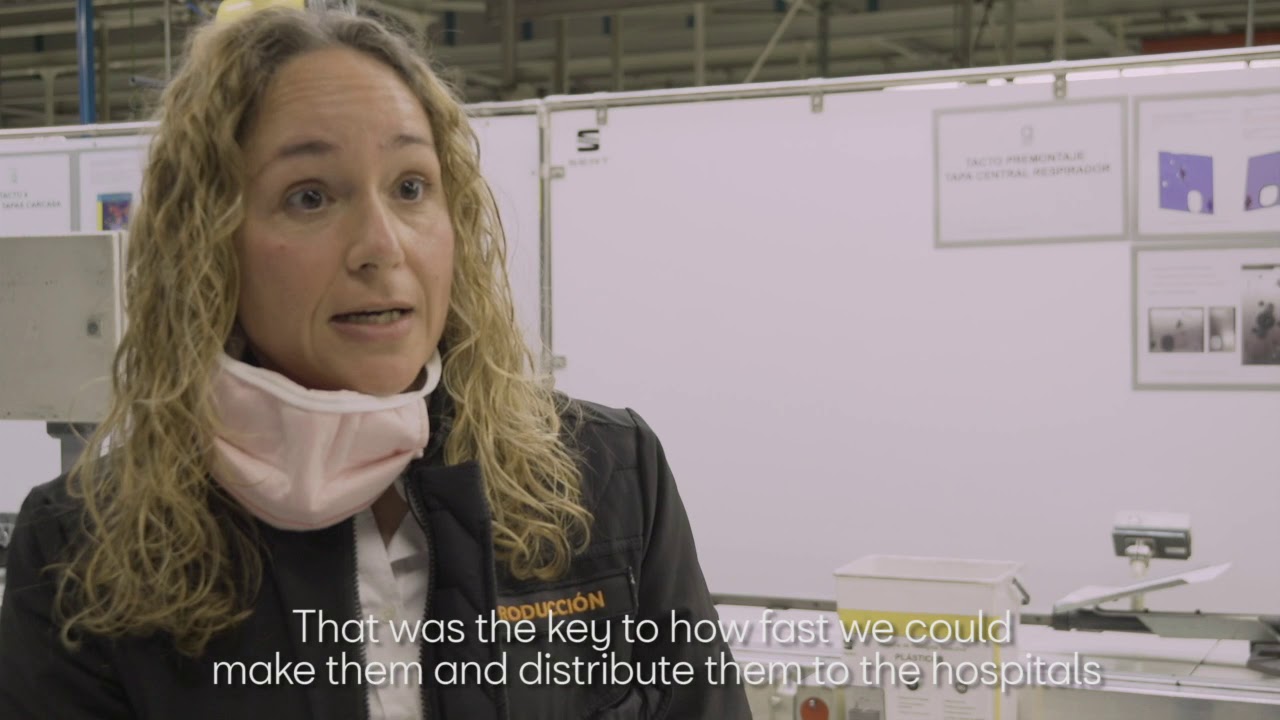 The real heroes are in the hospitals

Last April, the company adapted the production line of the SEAT Leon to make emergency ventilators and help the health system and professionals to curb the spread of the virus in Spain. This project involved more than 150 employees from all divisions of the company on a voluntary basis and was a demonstration of teamwork and open collaboration between companies, public administrations and start-ups, resulting in the company producing more than 600 emergency ventilators which were delivered to hospitals all over Spain: “It all stemmed from a conversation at home with my wife. Production had been halted in Martorell, and in view of the alarming numbers of people infected, I thought we should take advantage of SEAT’s capacity and the skills of our employees to help in some way”, says SEAT Vice-president for Production and Logistics Christian Vollmer. SEAT’s Health and Safety team, led by Dr. Patricia Such, took the next step and after contacting health care professionals from different hospitals came to the conclusion that one of their main needs was to have more ventilators. That’s how it all began.

A challenge against the clock. “I’m not a doctor or a nurse, I’m an engineer. I could only help by making equipment for the people who save lives, and that’s exactly what we did”, explains David García, the head of Maintenance at SEAT Martorell. He and Alicia Molina, the head of Metal Presses and Bodywork Process Engineering at SEAT, are two of the engineers who got the project off the ground, coming up with how to industrialise the prototype created by Protofy.XYZ, the Germans Trias i Pujol Hospital and the Hospital Clínic in Barcelona. “We hardly got any sleep, the team went out of its way to help and that was the key to quickly come up with resourceful ideas”, says Alicia.

“We went from designing mobility solutions for people to mobilising others so that people could breathe”, she went on to say. They managed to do this by using the same components and materials. For example, the electric components of a ventilator included the power source of a PC, an LED light controller and the motor of a windscreen wiper blade. “At first we thought of using the power window motors as we had more of them in stock, but we settled for the windscreen wiper motors because they guaranteed 2,000 hours of operation”, explains David. Another challenge was where to make the emergency ventilators. They decided to adapt the assembly line for the subframe of the new Leon. “We have an extraordinarily talented team; we were certain that we could do it and in fact we managed everything in just one week”, he adds.

From 15 to 150 people in the blink of an eye. As needs arose, the team grew in number with employees from all areas of SEAT. Elías Muñoz, a facility driver, volunteered without hesitation. He was in charge of installing the pressure regulators and operating lights on the ventilators. “It was definitely one of the most important jobs I’ve ever done”, explains Elías. Working alongside him on the line was Pilar Arroyo. She went from installing engines in vehicles to fitting ventilators with motors. “Every time a truck loaded with ventilators made its way to a hospital we all burst into applause. I’m really proud of what we did!”, says Pilar.

Every ‘superhero’ needs a special suit. None of them wears a cape, but they did need facemasks to avoid any risks while manufacturing the ventilators. That’s why in another workshop, SEAT’s Color&Trim, Nick Allen’s sewing machine didn’t stop in all those weeks. The car tailor pitched his experience of more than 35 years into the battle against COVID-19, making more than 50 facemasks a day for the entire team.

An emotional merry-go-round. This is how David García describes what those weeks were like. “At first we were a bundle of nerves. We knew we were capable of getting it done, but we were worried that we wouldn’t do it fast enough.” On Saturday April 4th, the first 20 OxyGEN #HOPE left Martorell for the Ramón y Cajal hospital in Madrid and Bellvitge in Barcelona. “We were extremely happy, but we also felt a huge sense of responsibility.” “The real heroes are in the hospitals; we just did what we do best”, he adds. According to the head of Maintenance at SEAT Martorell it’s still too early to process the feat they pulled off, so he ends by saying “if we can match what we did in those few weeks, we can handle any other SEAT project that comes our way.”