It all starts with a full charge: Felix Egolf collects the new ID.3* at the Volkswagen plant in Zwickau, which has been completely converted to the production of e-cars only. 2020-08-25

Efficiency master Felix Egolf took the first ID.3 to Switzerland. He drove the model with the medium battery pack (420 kilometers according to WLTP) from the Volkswagen plant in Zwickau to Schaffhausen – and mastered a distance of 531 kilometers with just one single battery charge. A record drive.

Felix Egolf is a “hypermiler”. This is the name of the car tester who is on the road with the aim of achieving the lowest possible consumption and the highest possible range. The retired airline pilot “sails” over the roads by repeatedly taking his foot off the acceleration pedal and letting the car roll. This saves fuel – or in this case electricity.

For his latest challenge, he has chosen the all-electric ID.3 from Volkswagen: The record-hunter wants to explore the range limit of the electric car, with a journey from Germany to Switzerland of around 530 kilometers. To do so, he is traveling to Zwickau in Saxony. Many of the 90,000 inhabitants work at the Volkswagen Sachsen GmbH plant, where cars have been manufactured for more than 100 years, including the Trabant in the past. An ID.3 with the medium 58 kWh battery option is already waiting for the Swiss test driver behind the entrance gate. After a short introduction, the electric car is packed – with two suitcases plus complete photo and film equipment including a drone.

The new Volkswagen ID.3¹ has set its first range record: The electric car covered the 531 kilometers from Zwickau to Schaffhausen (Switzerland) on a single charge. Officially, the model has a range of up to 420 kilometers (WLTP). This mark was topped by more than 100 kilometers – an increase of 26 percent. The vehicle was a series production ID.3 1st Pro Performance with a 58 kWh battery built at the Zwickau electric car factory. The route to Switzerland consisted entirely of public roads and highways, passing cities such as Bayreuth and Ulm. The record-breaking vehicle was driven by “hypermiler” Felix Egolf, a native of Switzerland. The term “hypermiling” originated in the USA and refers to driving a series production vehicle with techniques that maximize efficiency and minimize consumption.

Further information can be found on our Newsroom: https://www.volkswagen-newsroom.com/en

Note in accordance with Directive 1999/94/EC in its currently applicable version: Further information on official fuel consumption figures and the official specific CO2 emissions of new passenger cars can be found in the EU guide "Information on the fuel consumption, CO2 emissions and energy consumption of new cars", which is available free of charge at all sales dealerships, from DAT Deutsche Automobil Treuhand GmbH, Hellmuth-Hirth-Straße 1, D-73760 Ostfildern, Germany and at www.dat.de. 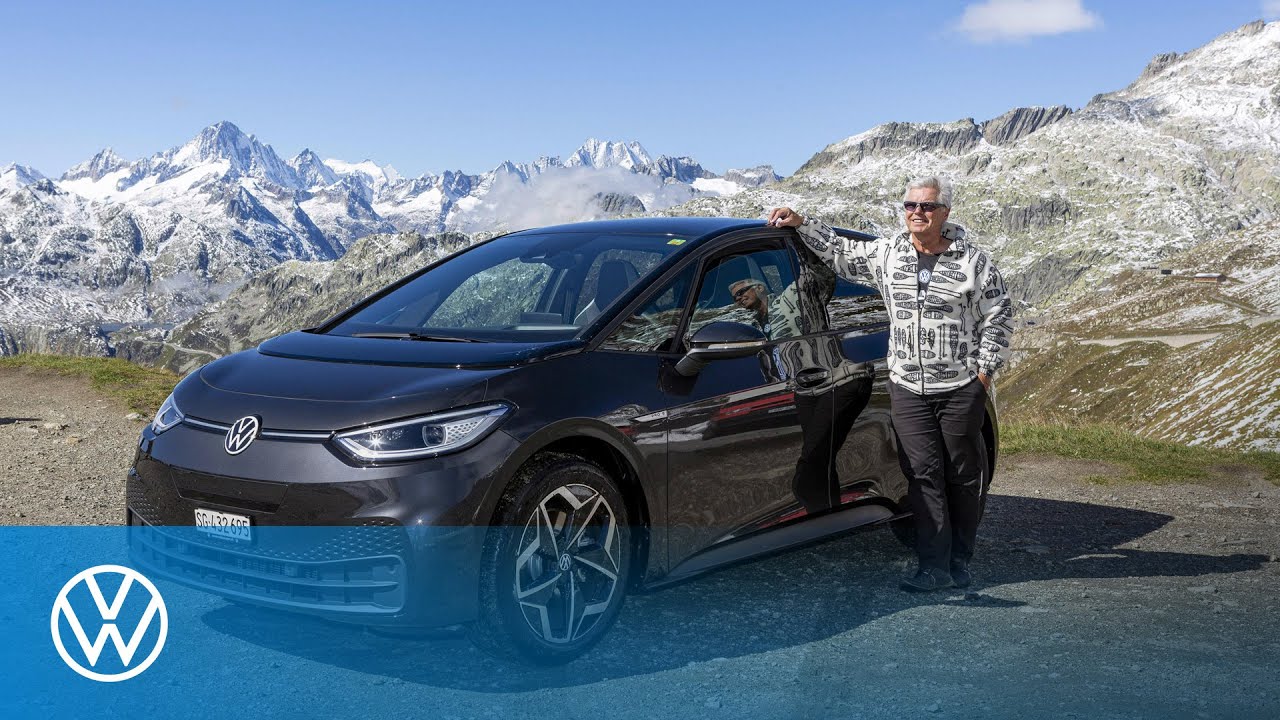 Range record: ID.3 makes the journey from Zwickau to Switzerland on a single charge

On the road with extra weight

According to the official vehicle specification, the ID.3 has a WLTP range of 420 kilometers with a fully charged battery. However, only the driver without luggage is assumed. But Felix Egolf, the cameraman and the equipment weigh almost 250 kilograms. But the experienced efficiency champion is not going to let that get in his way: He wants to prove that he can top the factory figures even with the additional weight.

The record journey starts the next morning shortly after 5 a.m. After the first hundred meters, it is already clear what distinguishes a hypermiler like Felix Egolf from other drivers: He is concentrated, energetic and very forward-looking – braking is avoided wherever possible to keep the car constantly moving. The average speed is 56 kilometers per hour. “The optimum would be to cover a third of the total distance without engine power,” he explains. His approach to roundabouts is particularly striking: Shortly before, he sets the automatic selector switch from “D” to “N”. The car practically flies towards its intended target, and the excess speed is gently reduced by means of recuperation – the recovery of energy by the engine braking. The chief attraction of the ID.3 is that it independently recognizes roundabouts and speed signs and slows down on its own.

Navigation, daytime running lights, radio and ventilation remain on. After all, comfort should not be compromised even during the long-distance test. The first half of the route consists mainly of highway kilometers. The ID.3 constantly occupies the right lane and glides along – with sufficient distance – in the slipstream of trucks.

Thanks to the up-and-down topography of the A9 through the Fichtelgebirge, longer sailing phases are always possible. Elevations are generally climbed at a rather leisurely pace, as they cause the displayed kilometer range to melt away. But this has its good side: “You perceive your surroundings more consciously and see more,” says the hypermiler. “The deceleration feels good. It clears your head.” The lost energy is partly recovered by recuperation when going downhill.

You can see that Felix Egolf enjoys driving the ID.3 by looking at him. He describes the cockpit with its large central display that is slightly tilted towards the driver as intuitive and functional. He also likes Volkswagen’s new e-car because of its futuristic design, low drag coefficient and the 204 PS, which propels the vehicle practically silently and jet-like via the rear-wheel drive. “In addition, the road holding, cornering and rolling characteristics are exemplary,” says the 63-year-old car tester.

A sigh of relief after 400 kilometers

At kilometer 87, in the Bavarian city of Hof, 19 percent of the battery is already used up. The range indicator reports 346 kilometers – but there are still 444 kilometers to go to the desired destination. That is why Felix Egolf now has to use all his skills. The journey passes tourist destinations such as Bayreuth, Nuremberg and Ulm. Here, after almost 400 kilometers, there is a sigh of relief: for the first time, the remaining range corresponds to the distance to the destination in Schaffhausen.

As the Swiss border draws closer and the remaining energy becomes increasingly scarce, the whole thing slowly feels like a crime thriller. An emergency plan is put into place: As a precautionary measure, research is already being done to find out where the next charging station is located. But the hypermiler trusts his instincts – and after passing through customs, he drives on unperturbed, although the battery power indicator is now at two percent and the destination is still more than ten kilometers away.

The tension becomes almost unbearable. Another five kilometers, another three, another one... But the risk pays off after nine and a half hours of driving and a distance of 531 kilometers: The first ID.3 in Switzerland reaches the AMAG car dealership in Schaffhausen. There, half of the workforce immediately gathers around the brand-new e-vehicle – and congratulates the driver on his record drive.

May also be of interest

A conversation with author Mirna Funk about remembrance culture and the future ...

Prof. Andreas Knie is one of Germany’s most prominent transport experts. He is calling for traffic to be reduced in our towns and cities – to give pedestrians and cyclists more space. ...

Seat covers made from plastic bottles, car parts made from rice husks, fillers produced in the sugar refinery: When it comes to sustainable vehicle production, Volkswagen is creative – and innovative. ...

Volkswagen is choosing clean energy for its transports. When it comes to rail transportation, Group Logistics is using green energy on German routes, and a pilot project using Bio-LNG as fuel for lorries is currently running on the roads. ...

“The climate crisis is the greatest challenge of our time,” says Herbert Diess, CEO of the Volkswagen Group. This dossier explains the efforts the company is undertaking to protect the climate. ...

Respect, tolerance, diversity lived out – these are the objectives of the LGBTIQ* and friends network #WeDriveProud at Volkswagen. ...

The Volkswagen Group is on its way to becoming a climate-neutral company. Many of the 660,000 employees are doing their own bit for sustainable management and to fight global warming. We introduce five people who work on protecting the climate on a daily basis. ...

The road to electrification requires industrial transformation at all levels. For this to happen, innovation is key. In Martorell’s Workshop 9, a drone flies above the production lines. ...

At the ITS World Congress, the Volkswagen Group will present new solutions for efficicent, sustainable, safe mobility. The world’s biggest industry event for intelligent transport systems will be held in Hamburg from 11 to 15 October 2021. ...